There’s room for you

And room for him

And room for them

And room for tall

Tell me how there is room for all?

Here is the secret

We refuse to ever make room for hate.

As America sits down this coming Thursday to celebrate Thanksgiving during one of the most tumultuous seasons in modern US history, perhaps a reminder of what the very first Thanksgiving represents for our nation is in order. For many, Thursday will be a chance to sit down with family and friends to express gratitude for the past year. Surviving the last month without throttling our neighbors is truly something to celebrate and give “Thanks” for.

Making room in our hearts and room at our tables for those who speak, look, believe, and act differently from us is a tall order especially when we as Americans have been inundated with the discourse of fear, hate and division.

The idea of breaking bread or sharing a meal was not foreign to the Pilgrims of Plymouth Rock.  This practice was built into the very fabric of their belief as Christians.

44 “All the believers were together and had everything in common. 45 They sold property and possessions to give to anyone who had need. 46 Every day they continued to meet together in the temple courts. They broke bread in their homes and ate together with glad and sincere hearts” Acts 2:44-46

Some historians claim that the idea of Thanksgiving came from the Jewish Holiday of Sukkot, the festival of ingathering or harvest, commemorating the Israelites Exodus from Egypt and their dependence on the will of God.

The native Wampanoag people had a strong tradition of planting that had been passed down for generations.There is a reason why the English translation of Wampanoag is “People of the First Light,” they too celebrated their appreciation for all plant life provided by the Creator throughout the year as they were continually nourished by their harvest. The Sachems, or leaders, of the tribe supported those in need: widows, the poor, sick and elderly were provided food. All members of the native community shared and ate well.  Since the newly settled Pilgrims suffered greatly in their new environment and were not perceived as a threat, the Wampanoag extended their generosity to their new neighbors.

The first Thanksgiving was the calm before the storm, the peace before the chaos. Before fear, division and hate seared a fissure through this relationship, we recognize the breaking of bread between these two groups. The moment they set all differences aside and were able to sit at the same table as equals, as fellow human beings.

We are all either immigrant, native, or a combination of both. In the past it has been up to the older generation to pass down wisdom and set the example of civility. Lately we seem to have forgotten this responsibility. Perhaps we need to look at the next generation.  Children have a way of seeing and recognizing the core or the basic element of a situation.  We tend to dismiss this view as simplicity or naivety. Maybe the key to peace is simply not allowing hate to take up space in our hearts and our minds, therefore making ROOM for everyone at our table. May we remember our ancestors and break bread in peace, as equals, as fellow human beings this Thanksgiving.

I leave you with one more snippet of sage advice from Brad (aka Kid President). 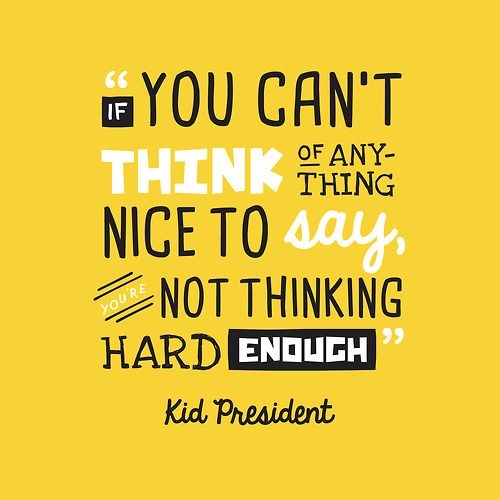